Recommitting to women’s health 25 years after the Beijing Platform for Action on Women: what must governments do? 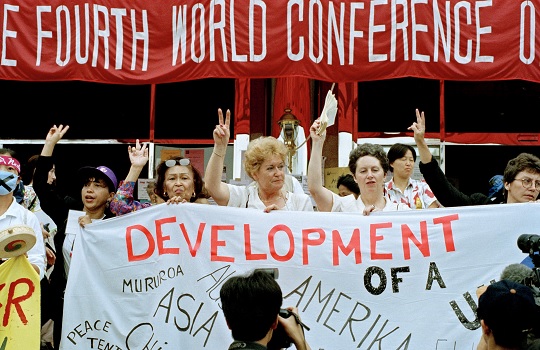 the bmj Opinion Blog- Progress on women’s health has been uneven, but by working together, we can create a better and healthier world for women and for all, say Tedros Adhanom Ghebreyesus, Phumzile Mlambo-Ngcuka, and David Malone

The unfinished agenda in women’s health

The year 2020 offers an opportunity to reflect on the progress made in the women’s health priorities identified in the landmark 1995 Beijing Platform for Action on Women. Twenty five years on, much of the agenda remains unfinished. For example, while the global maternal mortality rate declined by 38% between 2000 and 2017, the use of modern contraceptives by married women increased by only 2% between 2000 and 2019.

What is clear is that progress on women’s health has been uneven, with those facing multiple forms of discrimination (e.g. on the basis of ethnicity, class, disability) and deprivation being those most likely to be left behind. For example, in 64 countries, a health professional was present at childbirth for only 54% of the poorest households compared to 92% of the richest households.

Covid-19 has brought into sharp focus the disproportionate impacts of pandemics and crises on women and their health. But it also provides an opportunity to reimagine a future where women’s health and rights are non-negotiable, gender equality is achievable, and working towards it is the norm.

Long standing gender and other socioeconomic inequalities have been exacerbated by the covid-19 pandemic. While women and men seem to be infected by covid-19 in roughly equal numbers (48% of infections are in women), women health workers, who constitute the majority of the frontline providers, are among those most at risk of becoming infected. Women in the general population, who were already doing three times more unpaid care work than men, are now facing an even higher burden.

There has been an increase in reporting of violence against women, particularly intimate partner violence, from many countries. Lockdown measures have disrupted protective social networks, while rising economic insecurity is driving millions of people, especially women, into unemployment. All of this is impeding women’s access to basic necessities and services—a trend compounded by moves in several countries to deprioritize sexual and reproductive health services.

Towards a holistic agenda for women’s health

None of the issues highlighted above are new. The need for women to have autonomy over their sexuality and fertility is central to the women’s health agenda. At the same time, shifts in the burden of ill health mean that the agenda must be expanded to include rising rates of reproductive cancers, mental ill health, and other non-communicable diseases, as well as the emergence of new disease outbreaks (e.g. Zika, Ebola) that disproportionately affect women. To improve women’s access to healthcare, investments are needed in primary healthcare and community health workers, including in decent pay and working conditions for frontline workers. The agenda should also address determinants of women’s health, such as rising air pollution, rapid urbanization, and marketing of tobacco and alcohol that exploit gender stereotypes.

To achieve universal health coverage, explicit attention must be given to addressing inequalities, including interventions that counter unequal gender norms, prevent violence against women, and ensure women’s access to social and financial protection.

Investing in women’s health is a moral imperative. It is also a smart investment

Investing in women’s health and gender equality saves lives, improves health, and protects human rights. On the financial front, the covid-19 pandemic has presented governments with stark choices about budget allocations. The economic and social case for investing in women’s health is clear: it reduces poverty, increases productivity, and stimulates economic growth, with up to a ninefold return on investment through better educational attainment, workforce participation, and social contributions.

Health, development, and post-covid-19 recovery plans must prioritize the health of women. Women make up one half of the population, but too often their needs are treated as an afterthought. Several governments are showing the way forward by developing recovery plans that include sexual and reproductive health services, allocate budgets to support parents and caregivers as well as women affected by domestic violence,  and that target social safety nets to the most vulnerable households.

We commit to continuing our support to member states to deliver on women’s health and rights, including through the Global Action Plan for Healthy Lives and Well-Being for All. We call on governments and our partners to prioritize gender equality and women’s health, including but not limited to sexual and reproductive health. We must commit to women’s leadership in health policy making. We urge male leaders to be their allies and champions of gender equitable health policies.

Tedros Adhanom Ghebreyesus is the director-general, World Health Organization (WHO).